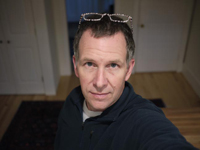 He has exhibited nationally and internationally, including solo exhibitions at the American University of Paris, Schroeder Romero and Shredder in New York City, SRO Gallery at Texas Tech University, Page Bond Gallery in Richmond, Virginia, and the Telfair Museums in Savannah, Georgia, among others.

Kolster holds a BA in American studies at Williams College, an MFA at the Massachusetts College of Art, and a certificate from the full-time Documentary Photography program at the International Center of Photography in New York City.

Kolster lives in Brunswick, Maine, with his wife, Christy Shake, son, Calvin, and Nellie, their goldendoodle.